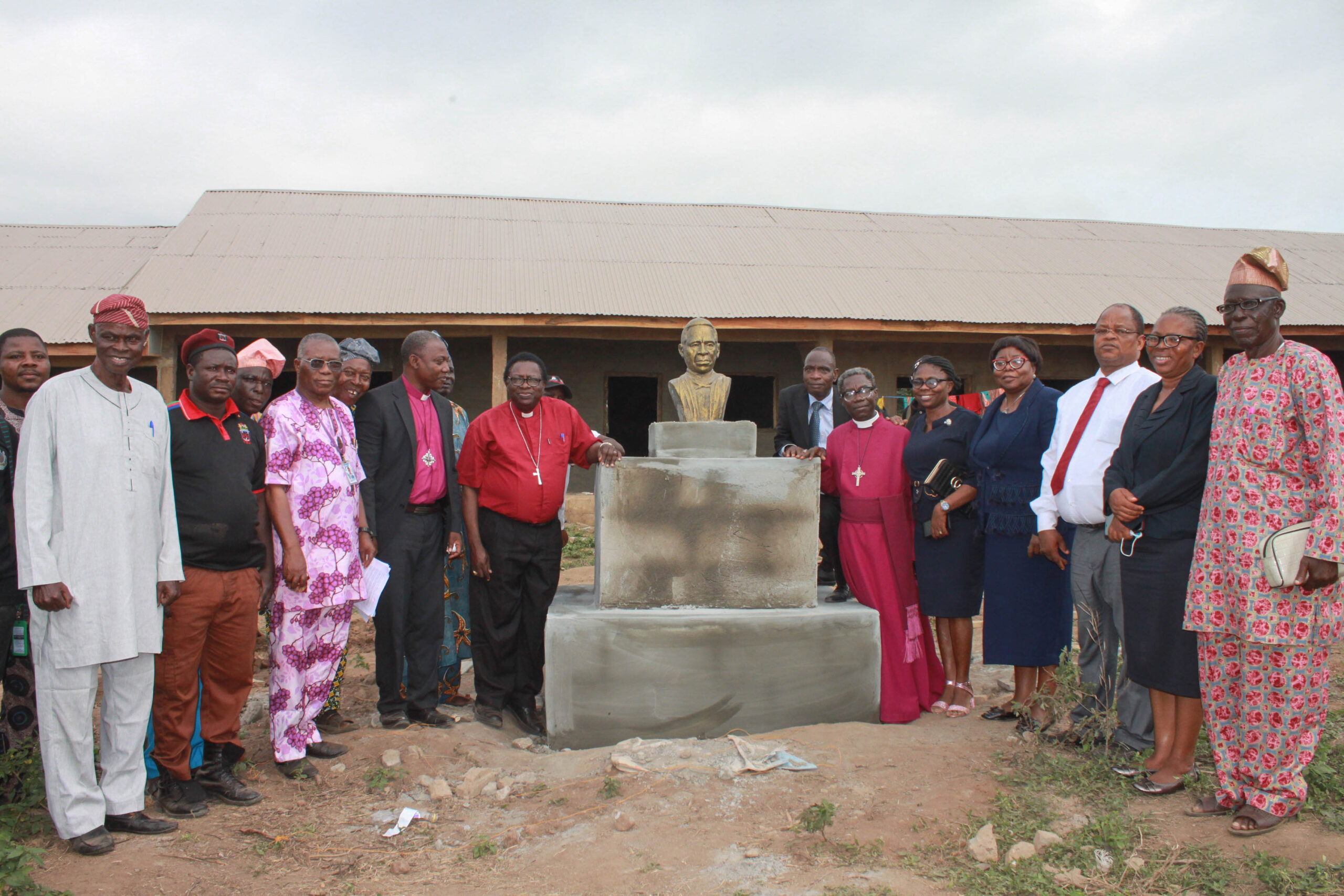 The entourage then moved to Bishop Ajayi Crowther Memorial Centre, a project of the Church of Nigeria ( Anglican Communion), being supervised by the  Diocese. At that brief reception, Bishop Oduntan   and leaders of the community expressed joy and gratitude to the University for the thoughtful decision to set up a campus of the University in Osoogun. He took the audience into a historical journey in which he explained that Samuel Ajayi Crowther was captured by slave merchants in 1821 when the village was raided. The young man was sold into slavery, but he became a mighty instrument in the hands of God for the propagation of the gospel. He became the first Black man to be ordained a bishop in the Anglican Church.  He told his audience that as a consequence of that raid, people deserted the village at that time for 91 years. It was in 1912 that the people began to resettle in the town. He said one of his dreams as bishop of Crowther diocese was to make the place a tourist attraction.

‘ I want to express my sincere gratitude to the University, and to Rt. Rev. Professor Dapo F. Asaju for going against all odds to obey the Holy Spirit in siting a campus of Ajayi Crowther University here. This will help me actualize my dream of making this town a tourist attraction. Already the Anglican Church is setting up Ajayi Crowther Memorial Centre in Osoogun.  The   Ajayi Crowther University campus here will certainly raise the profile of the town’ Oduntan said.

When he addressed the people, Rt. Rev. Professor Dapo Asaju thanked the community for donating the land on which the campus is being built. He said the University had no funds to begin the campus but a member of the Board of Trustees, Chief Bode Amoo, came to the rescue with a donation of N25m and an initial advance of N10 million with which the project was commenced. He said that intervention was, indeed, a clear sign that God was in support of the project. He said Ajayi Crowther deserves the best because he was the evangelist who, upon   freedom from slavery, brought Christianity to most parts of Nigeria and translated the Bible to many Nigerian languages. But the Church of England at that time did not appreciate him.

‘Ajayi Crowther did more than evangelism. Many people do not know that he was into agriculture too. He developed the planting of Cassava, and other crops that we all enjoy today, apart from the great work he did in evangelism. Recently the church in Eastern Nigeria celebrated 150 years of Christianity brought to them by Ajayi Crowther, I was invited to preach.  The white people did not treat him well. He died with a broken heart in 1891. But the Church of England has now apologized for the bad treatment meted out to him. The presence of the University and the memorial Centre will brighten the town.’ Asaju said. He also said that he was working with the Bishop of Ajayi Crowther Diocese to ensure that the body of Samuel Ajayi Crowther was exhumed from Lagos and reburied in Osoogun in accordance with the late Bishop’s wish.

The entourage later moved to the tree where Ajayi Crowther was tied  when he was abducted, and to his mother’s house from where he was taken. From those historical sites, the Senate members went to the campus where the meeting held. At the meeting, the Registrar, Mrs. Adenike T. Fatogun, at the prompting of the Vice- Chancellor, told the Senate that the Governing Council decided, in its last virtual meeting, that there would be no convocation this year as a result of the Corona Virus. The Convocation Ceremony of this year would be combined with that of next year. The Vice-Chancellor also revealed that the Centre for Entrepreneurial   Studies will commence lectures at the Osoogun Campus in September. It would be recalled that the Vice-Chancellor had said, in the past, that Osoogun campus would house the Centre for Entrepreneurial  Studies, Department of History and Archival studies, a branch of the Faculty of Agriculture and Centre for Anglican Studies.