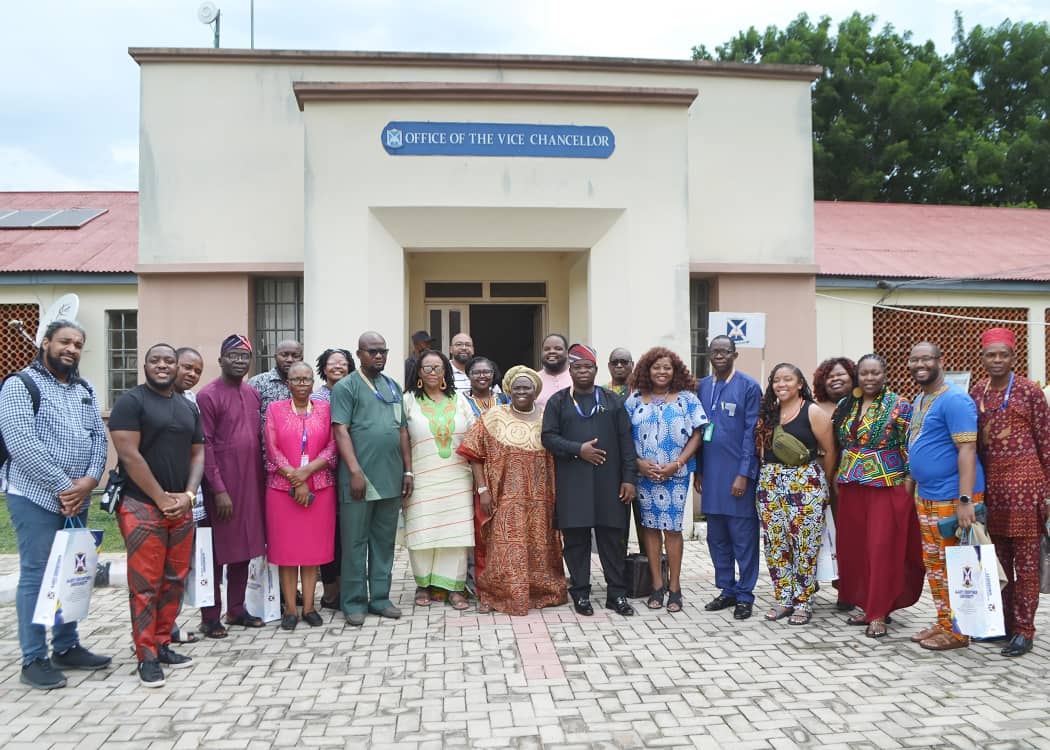 The leader of the group, Professor Mrs. Gloria Boutte, speaking during a courtesy call on the Vice-Chancellor, stated that the group came on a cultural tour of the western part of Nigeria and have visited selected places and institutions with a view to having collaboration with some of them. She revealed that they had visited University of Lagos, University of Ibadan, some Secondary schools, the palace of Alaafin of Oyo among other places.

In his response, the Vice-Chancellor, Professor Timothy Abiodun Adebayo, told the scholars that the University would be willing to collaborate with their institution. He took them on a historical trip to the evolution of the University, stating that it was product of early missionaries who first came to Abeokuta and later  moved to Lagos when they had some challenges in Abeokuta.

‘The missionaries felt that Lagos was too cosmopolitan to meet their desire to take education to the hinterlands. They moved to Oyo in 1896 where the king at that time showed them this land, where our main campus is located’ professor Adebayo said. ‘ ‘ They began training church teachers and agents until 1919 when they named the place Saint Andrew’s College, and began to train School teachers. Later it became College of Education. It was Old boys of the College that muted the idea of turning the place into a University before the Church of Nigeria (Anglican Communion) Supra West took over the bid and set up a committee to establish the University. It got the license in 2005 and resumed academic activities in 2006. We began on this campus but we now have four campuses. One of our campuses is in Osoogun, the hometown of Ajayi Crowther, the first African to become a bishop, whom the University is named after.  I am the fourth Vice-Chancellor of the University. We are delighted to receive you, and we would also be happy to have collaboration with your institution’ the Vice-Chancellor stated.

He also recalled that the bishop of the Diocese of Lagos, when the institution relocated to Oyo, Rt. Rev. Melville Jones and his wife moved to from Oyo. The couple passed away in Oyo, and were laid to rest on the premises. The Bishop died in 1940 at the age of 71 and his wife died in 1947 at the age of 90.

The Vice-Chancellor expressed gratitude to Professor Mrs. Mopelola  Omoegun, a member of the Governing Council of the University who facilitated the trip and came with the team.